Another trip to the humps
Got a late start but still made to the humps by 8am. Did not see anything on the way out but dirty water for 20 miles. One boat already there and some birds on north edge. Start putting spread out and right rigger goes off before I can get the second one in the water. First fish is small BFT but into the box it goes. Reset both rigs and doesn’t take long and I have a double on. Both were small, bleeder into box and let other one go. Next knock down is a much bigger fish so I lock down the drag and reel as fast as I can but the shark got it after a 2 min battle. I made several more passes putting some nice BFT in the box but the big ones got eaten by the sharks. With plenty to eat it was time to head back north to do some recon on the reef.

When I got to the reef it was a nasty green color. Checked out a few of my old spots on the sounder to see what was happening on the bottom. Some spots looked the same, but some were barren. Decided to stop at one since the wind and current were going the same direction. I only brought I box of chum so this was going to be quick stop. Never had the YT come to the surface but I picked off several from the bottom. I also free lined a live bait and put one down. Hooked up to one grouper, that I lost it in the rocks and two sharks.

Some dirty water out there but it was still a good day. 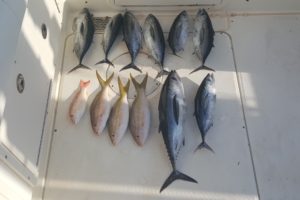