Had a repeat trip and he wanted to only target Groupers. He brought fresh speedos and we loaded up the World Cat with ice, bait and gear. Headed out NE to the spot we hit last time with good success. When we pulled up the sounder had good marks and we dropped the anchor.  The first two attempts the boat would not stop in right area.  A couple of times we had to reset before it even grabbed hold.  Finally, after 5 or 6 attempts we land in right spot.

Joe gets set up and drops a speedo down and I set up to bring some live bait in. He gets hammed but can’t stop the fish, first of many break offs. Joe gets hammered several more times, half by jew fish half by sharks. We can’t seem to win, so after taking a beating we move on to another spot.

This one looks good and anchor hits the right spot on the first time. Sounder lights up and Joe drops. It doesn’t take long and we a hooked up. Joe has got another tank on and gets rocked up. I am dropping for live bait and reeling them in. Every drop we are getting hammered. Joes next hook up he gets its head turned and success first black to the boat but 2” short. Next is my turn, not as big a fight but a nice size Rock Hind. Joe get nailed again and right into the rocks. We go back and forth, both sides of the boat are hot. Next my little accurate get slammed but I was able to wench it out of the rocks and put a nice 15lb black in the box. Joe then gets hooked up with a nice snapper. We battle threw the breaks off and end up with a Flag YT, nice mutton, huge schoolmaster, Rock Hind and Black. For ref the YT is 19”

Great day out of Marathon 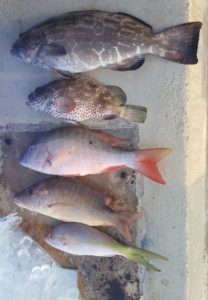